On Friday 26 April 2013, the Adamstown Uniting Church in Newcastle Australia hosted an evening to celebrate my book

Being Gay Being Christian

The evening was a wonderful night with almost 100 people coming along to show appreciation, to celebrate the book and to gather with like-minded others to discuss the issues raised. There were people present from all walks of life: gay, straight, Christian, atheist, Catholic, Protestant, evangelical, pentecostal, partnered, single, young, old, laity and clergy. Among the clergy, we had Anglican priests and ordinands, Uniting Church ministers, Catholic priests and nuns and even the local Catholic Bishop. What an extraordinary mix of people, all interested, all talking, all sharing, all laughing, all friendly. We had the chance to eat some canapes and drink a glass of wine beforehand for about half an hour which set up such a convivial atmosphere that by the time we sat down for the official part of the evening, we were all acquainted and feeling very positive about the evening to come. By the time we got proceedings started, I could feel the very real love among us all as brothers and sisters.

The evening was recorded but unfortunately, we were not able to film, but below you can hear the various segments and watch a slide-show to accompany each. I list them below in the order of the evening's proceedings. We certainly had some great laughs and I got to share a little bit about faith and sexuality in the church. You can listen all the way through or come back a few times to hear the various parts. Either way, I do hope you enjoy the evening.

And one last thank you: thank you too for your support in reading this book and in coming back to this blog. After one year now, I do think the book has been very helpful to a lot of people so I hope it will have a long life. If you have found it helpful, I would love you to recommend it to others so that the word gets out there to everyone who needs to hear:

being Gay being Christian - you can be both

2. Greg Archer speaks to the gathering as a reader of the book. He shares his own remarkable story and how BGBC became a part of that story (11.20 mins)


5). This is the occasional address. In this video, I offer some remarks about gay sexuality, faith and the church. As part of this slide show, I include some images close to the beginning of the set of elephant tv where I shot a documentary in 2012 on Same Sex Marriage in Auckland New Zealand and also some shots in the green room at NZ TV where I appeared on the Breakfast show. (20.44 mins)


6). This final video is a brief Q & A after the main address. Erratum - In this Q & A I made the mistake of saying that this year is the 30th anniversary of homosexuality being removed from the DSM (the Psychiatrist's book of mental disorders) - I meant to say the 40th anniversary. (18.03 mins) 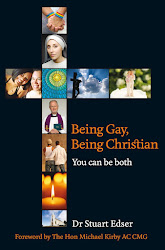